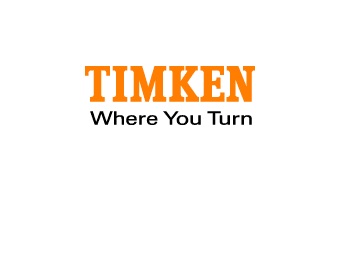 — Earns $0.86 per diluted share; continues to generate strong operating margins across all segments

CANTON, Ohio, July 25, 2013 /PRNewswire-FirstCall/ The Timken Company (NYSE: TKR; www.timken.com) today reported sales of $1.1 billion for the second quarter of 2013, a decrease of 16 percent from the prior year. The decline primarily reflects lower off-highway, industrial distribution, and oil and gas demand as well as the impact of the company’s market strategy in the light-vehicle sector, partially offset by the benefit of acquisitions. In addition, sales reflect a $49 million decline in raw material surcharges from the prior-year quarter.

Timken generated net income in the second quarter of $82.8 million, or $0.86 per diluted share.  This compared with $183.6 million, or $1.86 per diluted share, during the same period a year ago, which included income of $69 million, or $0.70 per share, from Continued Dumping and Subsidy Offset Act (CDSOA) receipts.  The decrease in second-quarter earnings also reflects lower demand as well as unfavorable sales mix.  The decrease was partially offset by lower raw material costs (net of surcharges) and selling and administrative expenses as well as lower costs related to previously announced plant closures (reference Table 1 for comparison of results).

“We continue to perform very well, maintaining double-digit operating margins despite weak demand lingering in many global markets,” said James W. Griffith, Timken president and chief executive officer.  “Although our outlook for the year now reflects a more modest market recovery in the second half, we continue to expect strong financial performance for the remainder of the year.”

Among recent developments, the company:

Six Months’ Results
Timken posted sales of $2.2 billion in the first half of 2013, down 20 percent from the same period in 2012. The decrease reflects lower off-highway, industrial distribution and oil and gas demand as well as the impact of the company’s market strategy in the light-vehicle sector, partially offset by acquisitions.  In addition, a $121 million decline in raw material surcharges from the prior-year period negatively impacted first-half revenues.

In the first half of 2013, the company generated net income of $157.9 million, or $1.63 per diluted share. That compares with $339.3 million, or $3.44 per diluted share, in the same period last year, which included CDSOA receipts of $69 million, or $0.70 per share.  The decrease in earnings during the first half of 2013 was driven by lower demand, sales mix and higher manufacturing costs, partially offset by improved pricing and lower selling and administrative expenses as well as lower costs related to previously announced plant closures (reference Table 2 for comparison of results).

In the first half of 2013, the company generated $139.5 million in cash from operating activities. Excluding discretionary pension contributions of $66.3 million, net of tax, free cash flow (operating cash after capital expenditures and dividends) was $16.7 million. In addition, the company repurchased 1.4 million shares totaling $82 million and made three acquisitions totaling $67 million.  The company ended the quarter with $1.3 billion of liquidity.

EBIT for the segment was $52.4 million for the second quarter, or 13.3 percent of sales, up 7 percent from $48.8 million, or 10.9 percent of sales, in the same period a year ago.  The increase was driven primarily by lower manufacturing costs, reduced selling and administrative expense and reduced plant closure costs, partially offset by lower volume.

For the first half of 2013, Mobile Industries’ sales were $790.2 million, a decrease of 14 percent from the same period a year ago.  First-half 2013 EBIT was $103.6 million, or 13.1 percent of sales, down from $135.5 million, or 14.8 percent of sales, in the prior-year period.  The decrease in EBIT was driven primarily by lower volume and the impact of exited business, partially offset by lower selling and administrative expense and lower plant closure costs.

Process Industries Segment Results
Process Industries’ second-quarter sales were $317.4 million, down 6 percent from $337.7 million for the same period a year ago. The decrease reflects lower demand in both the industrial distribution and original equipment market sectors, partially offset by pricing and the favorable impact of the previously announced industrial services acquisitions.

Process Industries’ second-quarter EBIT was $54.6 million, or 17.2 percent of sales, a 23 percent decrease compared with $71.3 million, or 21.1 percent of sales, for the same period a year ago.  The decrease reflects lower volume partially offset by pricing, lower selling and administrative expenses, and the benefit of acquisitions.

For the first half of 2013, Aerospace sales were $164.5 million, 8 percent lower than the same period a year ago.  First half 2013 EBIT was $16.5 million, or 10 percent of sales, compared with $18.6 million, or 10.4 percent of sales, in the prior-year period.  The decline in EBIT was driven primarily by lower volume and higher manufacturing costs, partially offset by pricing and lower selling and administrative expense.

Steel Segment Results
Sales for Steel, including inter-segment sales, were $354.1 million in the second quarter, a decrease of 29 percent from $499.8 million for the same period last year.  The results reflect reduced shipments to the industrial and oil and gas market sectors, partially offset by improved sales to the mobile on-highway sector.  Raw-material surcharges decreased $49 million from the second quarter last year.

Outlook
The company revised its outlook for the full year based on a slower-than-expected economic recovery in the second half of 2013.

The Timken Company now expects 2013 sales to be 10 percent lower year-over-year with:

Timken projects 2013 annual earnings per diluted share to range from $3.30 to $3.60, which includes approximately $0.15 per share for previously announced plant closure costs.

The company expects to generate cash from operations of approximately $475 million in 2013.  Free cash flow is projected to be $25 million after making capital expenditures of about $360 million and paying about $90 million in dividends.  The company does not anticipate making further discretionary pension contributions this year beyond the $66 million, net of tax, made in the first quarter, as it expects its pension plans to be essentially fully funded by year end given the recent increase in interest rates.  Excluding discretionary pension contributions, the company forecasts free cash flow of approximately $90 million in 2013.

Conference Call Information
Timken will host a conference call today at 11:00 a.m. Eastern Time to review its financial results.  Presentation materials will be available online in advance of the call for interested investors and securities analysts.

About The Timken Company
The Timken Company (NYSE: TKR; www.timken.com), a global industrial technology leader, applies its deep knowledge of materials, friction management and power transmission to improve the reliability and efficiency of industrial machinery and equipment all around the world.  The company engineers, manufactures and markets mechanical components and high-performance steel.  Timken® bearings, engineered steel bars and tubes—as well as transmissions, gearboxes, chain, related products and services—support diversified markets worldwide.  With sales of $5.0 billion in 2012 and approximately 20,000 people operating from 30 countries, Timken makes the world more productive and keeps industry in motion.

Certain statements in this news release (including statements regarding the company’s forecasts, estimates and expectations) that are not historical in nature are “forward-looking” statements within the meaning of the Private Securities Litigation Reform Act of 1995. In particular, the statements related to expectations regarding the company’s future financial performance, including information under the heading “Outlook,” are forward-looking. The company cautions that actual results may differ materially from those projected or implied in forward-looking statements due to a variety of important factors, including: the finalization of the company’s financial statements for the second quarter of 2013; the company’s ability to respond to the changes in its end markets that could affect demand for the company’s products; unanticipated changes in business relationships with customers or their purchases from the company; changes in the financial health of the company’s customers, which may have an impact on the company’s revenues, earnings and impairment charges; fluctuations in raw material and energy costs and their impact on the operation of the company’s surcharge mechanisms; the impact of the company’s last-in, first-out accounting; weakness in global or regional economic conditions and financial markets; changes in the expected costs associated with product warranty claims; the ability to achieve satisfactory operating results in the integration of acquired companies; the impact on operations of general economic conditions; higher or lower raw material and energy costs; fluctuations in customer demand; the impact on the company’s pension obligations due to changes in interest rates or investment performance; the company’s ability to achieve the benefits of announced programs, initiatives, and capital investments; and retention of CDSOA distributions. Additional factors are discussed in the company’s filings with the Securities and Exchange Commission, including the company’s Annual Report on Form 10-K for the year ended Dec. 31, 2012, quarterly reports on Form 10-Q and current reports on Form 8-K. Except as required by the federal securities laws, the company undertakes no obligation to publicly update or revise any forward-looking statement, whether as a result of new information, future events or otherwise.