For corrosion protection and decorative purposes, black oxide finish has a long tradition. In order to facilitate the application of this technology for improving the properties of surfaces, the process itself as well as the requirements and testing methods were standardized in DIN 50938 and ISO 11408 and further refined by the bearing industry for its specific application to rolling element bearings.

The benefits of a black oxide finish for rolling bearings

Black oxide finished bearing components feature a set of special technical characteristics, especially in the case of components that move relative to each other. Multiple protective effects can be achieved if only one functional element (typically the rolling elements) is treated. For best effect, however, all functional surfaces of a rolling element bearing, including the inner and outer ring as well as the rolling elements should be black oxide finished. The main benefits of using this protection method can be summed up as follows:

Benefit 1: Improved run-in and wear characteristics
The conversion layer of the black oxide finish exhibits a marked resistance against wear and bending. This results in favourable run-in characteristics and run-in periods of rolling element bearings and a subsequent trouble-free and long-lasting operation. Wear during run-in is reduced considerably and the run-in period is significantly shorter than that of standard rolling element bearings. In addition, the porous nature of the conversion layer aids in the adhesion and retention of lubricant on the functional surfaces, thereby improving the lubrication conditions especially in the critical run-in and start-up phases.

Benefit 2: Improved adhesive wear characteristics
Rolling bearings operating in low-load situations and bearings that are subjected to rapid speed changes during operation can be susceptible to adhesive wear (slippage damage and smearing). Under these conditions, slippage occurs at the contact area between the rolling elements and most commonly the inner ring raceway, especially when the difference between the rolling speeds between raceway and rolling elements is very high. The resulting slippage, which mainly takes place where the rolling elements enter the load zone, causes smearing. This, in turn, causes lasting damage to the rolling element and raceway’s surfaces and material structure. The operating characteristics of the bearing consequently deteriorate quickly and a premature failure of the bearing is not unusual. This type of damage often occurs where lubrication is insufficient or an unsuitable lubricant is used.

A special type of slippage damage occurs on full complement cylindrical roller bearings where the counteracting surface speeds of the contacting rolling elements prevent the formation of a stable lubricant film to separate the contact surfaces. Here, direct contact between adjacent rolling elements cannot always be avoided so that, as friction increases, smearing and damage to the rolling elements’ lateral surfaces occur.

In both cases, the black oxide finish can act as a protective layer, which delays the onset of wear and smearing. If steel on steel contact occurs due to a short breakdown of the separating lubrication film, the risk of cold shut and other types of severe surface damage is reduced considerably.

Depending on the severity of the operating conditions in an application, the conversion layer will eventually wear off, not least because of its limited thickness.

The practice at NKE

Cylindrical roller bearings with a bore diameter smaller than 560 mm are designed to operate at an operating load of approx. 1 percent of their dynamic load carrying capacity and with a rotation speed of up to 1200 rpm. Despite design measures to reduce the number of rolling elements and thus the load carrying capacity, the formation of the characteristic arrow or diamond shaped smearing marks (Fig. 1) in the raceway and corresponding damage to the rolling elements (Fig. 2) cannot be entirely avoided. NKE resolved this issue effectively by using rolling elements with a black oxide finish and introducing a lubricant chosen specifically for this application.

Benefit 3: Protection against environmental effects
In combination with its other advantages, black oxide finish also provides protection against environmental effects. Besides providing better corrosion protection in conjunction with a suitable lubricant, the black oxide layer also helps prevent fretting corrosion and forms a barrier on the bearing steel against harmful hydrogen diffusion and chemical reactions with aggressive lubricant ingredients, such as the wear and corrosion protection additives often found in oils to improve their effectiveness in gear tooth systems.

In summary, black oxide finish is a cost-effective and technically viable means of prolonging the service life and/or performance of rolling element bearings especially in critical applications. The suitablility of this measure for specific applications should always first be assessed, however. 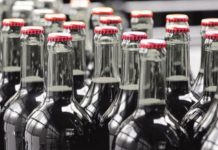 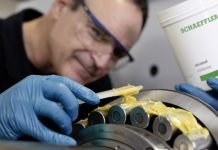 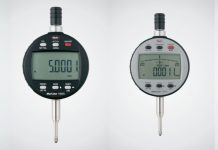