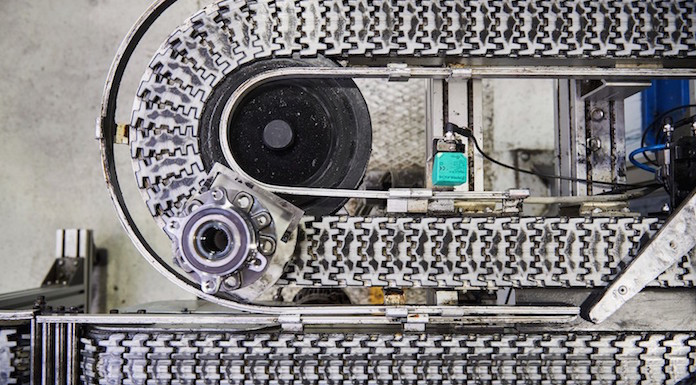 SKF’s bearing factory in Airasca, Italy, embarked on a digital transformation in partnership with Siemens. Now, both parties want to apply their learnings to more locations.

When it comes to major undertakings – whether in personal life or in a business context – you want somebody you can trust at your side. And when the project involves something new, friendly support is even more important.

For a major digital enterprise transformation at SKF, Kent Viitanen, president of the company’s Bearing Operations, and his colleagues count on support from the Siemens team under the leadership of Achim Peltz, CEO of Siemens Motion Control. However, today’s collaboration was the brainchild of their predecessors.

It all started in 2018, when SKF management met representatives of Siemens management at Hannover Messe. Their conversations led to a meeting in Bad Neustadt where they discussed the benefits of the Digital Enterprise – an end-to-end, value-driven, structured approach for digital manufacturing. In a further meeting, CEOs from Siemens and SKF came together in Gothenburg in 2019.

The Digital Enterprise enables sustainable competitive advantages. Could SKF implement it in their production facilities? Talks started, and the main stakeholders from SKF – including managers from the company’s lead factories – visited Siemens’ Arena of Digitalization in Bad Neustadt, Germany, where people can experience the entire Siemens digital portfolio.

After the visit, SKF decided to embark on a digitalization journey at its own locations. With almost 100 factories and nearly 41,000 employees, the potential was significant for SKF. The bearing company recognized the opportunity to further accelerate its ambition to become a leader in digital manufacturing. It wasn’t about trying out a solution, but revolutionizing how SKF works. The passion in the team was very evident and gave rise to a “let’s do it” mindset that’s still in force at SKF today.

Thus, a collaborative partnership was initiated between Siemens and SKF, with both parties bringing their expertise to the table – Siemens brings its know-how with digitalization, SKF brings its more than 100 years of experience in bearing manufacturing. At the very beginning, the people at SKF stressed that all steps had to add value. That turned out to be a good match for Siemens, where digitalization is designed to bring concrete advantages. Plus, Siemens involves customers in every step, making the whole process a true co-creation.

One of the first activities was a scoping workshop involving a joint, cross-functional Siemens-SKF team. This was more than a strategy meeting, as it involved colleagues from across SKF, including salespeople, application engineers, product engineers, production staff, and shop floor technicians. That way, those who would really be impacted by the solutions were able to provide their input. To complete the big picture, Siemens also had all necessary expertise and know-how on board, including technology experts, digitalization consultants and service experts  to make this partnership a success.

Pilot site in Italy selected as a blueprint for digital transformation

It soon became clear that the best way forward was to select an SKF factory as a pilot that would later serve as a blueprint for further SKF manufacturing sites. ”It was all about the big picture – optimizing the entire value chain towards our customers, but starting step-by-step with a very structured approach. You could say we were thinking big but starting small,” explains Niki Homes, who heads SKF’s department Future Factory.

The decision was made to start with a line at the Airasca site in Italy where SKF manufactures wheel-end bearings. Airasca was selected among others for strategic fit, the enthusiasm of the team to implement digital solutions, and because it has an existing end-to-end process with a short physical distance between customers, suppliers, and manufacturing. Plus, the initiative fit well with the site’s strong LEAN transformation.

The SKF and Siemens team analyzed all findings from the scoping and subsequent workshops. Among the first big activities was to describe the as-is situation on the line, record all working processes, and identify opportunities and pain points. These initial steps were guided by the Siemens approach for creating a digitalization roadmap.

In projects like this one, integration happens on two planes: Horizontally it entails using process automation, digitalization, and tools like Teamcenter software and Opcenter software, all part of the Xcelerator portfolio, the comprehensive and integrated portfolio of software and services from Siemens Digital Industries Software, to create a holistic value chain that start with the customers’ wishes and extends from product design to manufacturing. Vertically it means consistent data availability on all assets – for the shop floor all the way to a company’s decision makers. Vertical and horizontal integration at the same time is a major task, especially in established brownfield sites like the one in Airasca where equipment from various suppliers and from different generations comes together.

So, one of the first steps to create a digital factory was to connect all assets in Airasca, from machines to measuring devices, as well as 3D designs, embedded software, documentation, and more. For this, SKF deployed an end-to-end solution linking Siemens’ Industrial Connectivity Services to other Xcelerator portfolio elements such as MindSphere, the industrial IoT as a service solution, and the Mendix app platform.

Filipp Rosinski, Digital Transformation Manager at Siemens, sees data integration as one of the key successes in this project. But there’s more: “By having all data in one place, a whole range of possibilities opens up. We can introduce tools like the closed-loop digital twin. Or we can integrate IT and OT to derive more robust insights and actually use data for planning production steps and more,” he says. Siemens has a concept – Digital Enterprise – to establish vertical and horizontal integrated architectures in its own factories. That gives the company a big advantage, because it can draw on real-life experience when implementing digital threads in a customer’s brownfield environments.

With this architecture in place, Siemens and SKF are improving concrete processes at the Airasca site.

Digitalization at SKF: What’s next?

“We’re looking at the possibility to further extend and support the vertical integration by introducing industrial edge computing and upgrading the computer and data storage infrastructure. That will help us to leverage artificial intelligence and machine learning to an even greater extent so that we can optimize our processes and value chain further,” says Niki Homes. “It could also involve using outside partners who have specific expertise with aspects relating to the digital ecosystem.”

Always an eye on what could be – that’s the spirit in which the partnership between Siemens and SKF was founded. Achim Peltz and Kent Viitanen are seeing to it that the showcase collaboration they happily “inherited” continues in that vein. Everyone benefits: SKF gets a blueprint for its digitalization journey, and Siemens continuously optimizes its digitalization portfolio and benefits from more user experiences across industries.