The MESYS Shaft Calculation software allows the calculation of coupled shaft systems including nonlinear bearing stiffness and consideration of housing stiffness based on reduced FEA-stiffness matrices.

Housing geometry can be imported from CAD data as STEP file, meshing, static and modal reduction is then done within the software. Also FEA meshes can be imported and reduced or a stiffness matrix generated with FEA programs can be used too. Meshes can be generated as hexahedral and tetrahedral meshes with either linear or quadratic shape functions.

FEA based 3D-elastic parts can not only be used for housings, but also for shafts or planet carriers. Here also large rotations around the axis needs to be supported.

Since version 10/2018 reduction of 3D-elastic parts is not only done for a single node for one bearing, but elastic deformations of bearing rings and gear bodies were supported too. At the Hannover fair as further extension contact between elastic bearing rings and elastic housing can be considered.

Different models for interface between bearing and housing

Image 1 shows a single bearing loaded horizontally and without clearance in an elastic block which is clamped rigidly at the bottom for four cases. The left two cases are using a static reduction of the housing to a single node. The reduction is done by a rigid constraint in the first case and by averaging displacements in the second case. Using a rigid constraint is stiffening the housing, leading to much smaller deformations. Using a single node for the reduction of the housing bore leads to bearing forces acting on the whole cylindrical surface of the bore, which does not correspond to reality as the bearing forces are transmitted by pressure and not by tension. But this is acceptable in many cases.

The third case is using an elastic bearing ring glued to the housing, so no nonlinear contact between ring and housing is considered. Compared to the second case the horizontal deformation is quite similar, but a vertical displacement is added due to consideration of the deformations of the ring. The right case is considering contact between the bearing ring and the housing which leads to slightly increased deformations in horizontal and vertical direction. In the cases using an elastic ring forces to the housing are only applied in the load zone of the bearing.

If the clearance for a radially loaded bearing is increased, the maximum contact stress is increased and bearing life is reduced as less rolling elements share the loads. This also be seen in a calculation of a single bearing. But how is the influence of clearance between bearing outer ring and housing? If the bearing ring deforms its shape will approach the radius of the housing. To answer this question a calculation with contact between bearing ring and housing can be done. Load direction is selected downwards to minimize deformations of the housing.

In image 2 the blue curve shows the contact stress of the bearing with internal clearance, while the red curve shows the contact stress with zero internal clearance but clearance between outer ring and housing. The range of the clearance can be divided into three parts. For small clearance both cases show identical results, then there is a range with a constant difference between the two curves. The reason for this is the bending stiffness of the ring. In a third range the contact stress approaches a constant value in case with clearance to the housing. The usual operating conditions of the bearing should be below 0.05mm, the diagram was only extended to give an impression what will happen for large clearance.

Like for bearing rings also elastic gear bodies can be defined to consider elastic deformations of gears. In image 3 the first two cases are just using a beam model with full cylinder or reduced diameter, which is sometimes done to reduce stiffening of the shaft. The next three cases use 3D-elastic gear bodies of different shape.

Comparing cases 1, 2 and 4 shows that the full cylinder in the beam model is too stiff regarding deflection and the reduced diameter in case 2 is closer to the 3D-model. But regarding line load of the gear, case 2 leads to much increased loads on the gear flank. So for analysis of the gear contact a full cylinder is better than a reduced diameter, if not a 3D-model can be used.

The ratio wmax/wavg is the ratio of maximum line load to average line load. It would be the load dependent part of the gear face load factor; the effect of tolerances would have to be added by varying flank line modifications.

Evaluation could be done as dynamic factor over speed for gear pairs for example. The peaks show possible resonances, but for the amplitude the influence of damping is a problem as there are restricted possibilities to define damping and usually there is only little knowledge about damping too. Like the variation of gear forces also amplitudes for bearing forces can be shown. 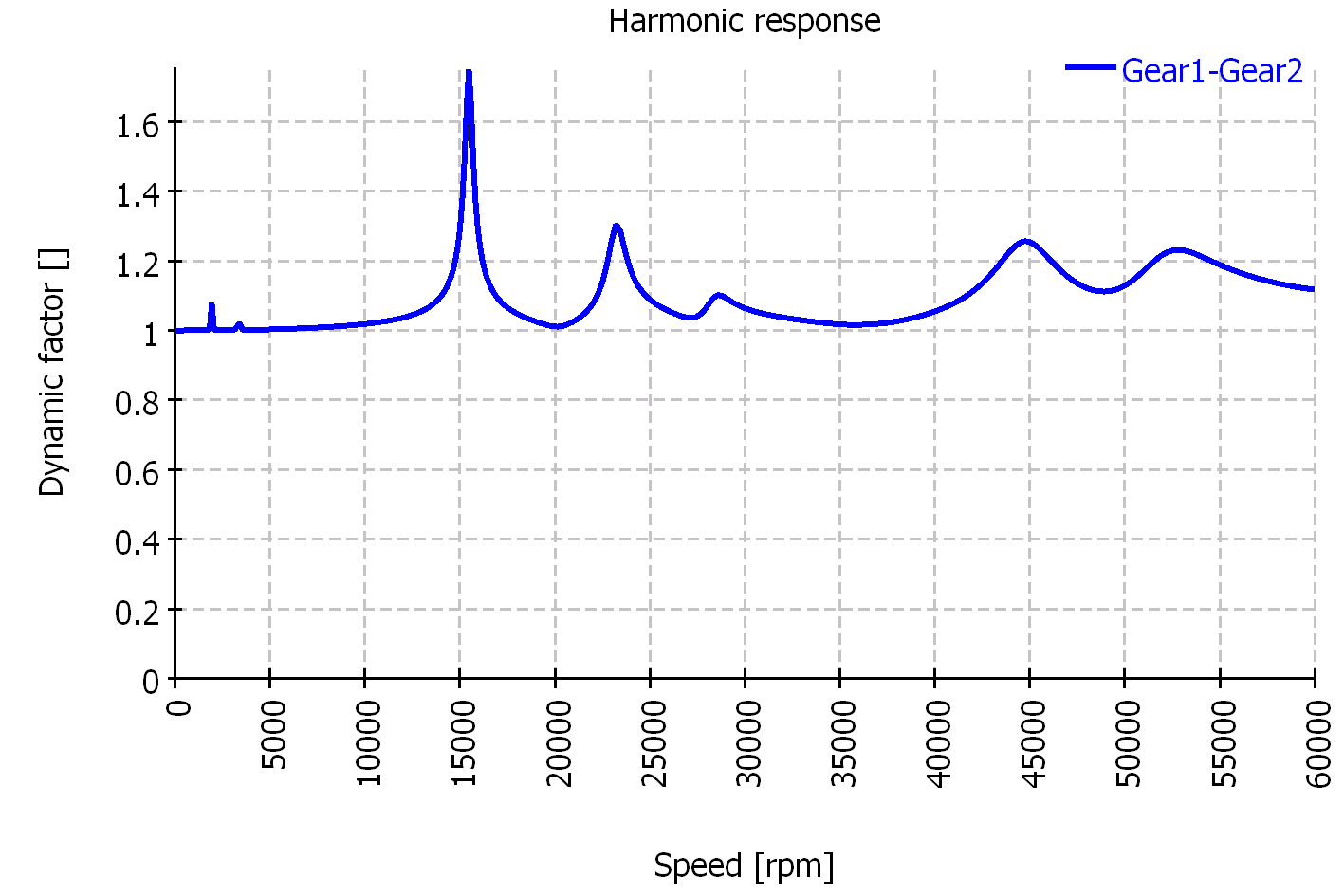