Automation in the manufacturing industry is continuing to grow in demand and can be applied to nearly every application from processing, assembly, inspection to packaging. Gantries and 6-axis industrial robots are widely used to achieve automation for applications such as palletizing, sorting, and pick & place to name but a few. When specifying a gantry or robot, consideration needs to be given to the required task and payload, the grippers that will be attached to the system, and the distance and speeds required.

For many applications, a linear motion guided gantry system can accomplish the same tasks as an industrial robot while incurring less cost and offering greater flexibility. Indeed, where the task involves moving heavy and awkwardly shaped products over a large distance – a gantry system is undoubtedly the better solution. HepcoMotion’s Chairman, Giles Forster explains the benefits of gantry systems.

A key benefit of gantry systems is that they have the ability to lift higher loads over a greater distance. A 3 metre square gantry for example, can position a payload of say 400kg anywhere within that 3 metre envelope on both axes. Conversely, an industrial robot has limited capacity in terms of moment load, and when the load is extended away from the robot, the payload will reduce the further it extends from the central axis. For example, the payload will reduce by approximately 50% when the horizontal reach is extended to just 0.7 metres with a typical 6-axis robot. A sizeable robot is therefore needed for a small payload moving a greater distance. As the work envelope grows in size, the gantry’s cost advantage increases.

Highlighting the benefits of a gantry in a larger working area, HepcoMotion has been working with bespoke material handlers, Avanti Conveyors for over 18 years, supplying a range of HDS2 gantry solutions to lift pallets. Each gantry has a payload of 120kg, with the X-axis moving at a speed of 2m/s, the Z-axis moving at 1.8m/s and the Z axis providing a 2 metre stroke. Ranging from 12 metres in length up to 30 metres long, these systems are picking and placing across a wide area, demonstrating the suitability of gantries for working in larger working areas. HepcoMotion offers a range of gantries – from a light payload, high speed to a heavy payload, there is a solution to meet the requirements of customer’s applications. 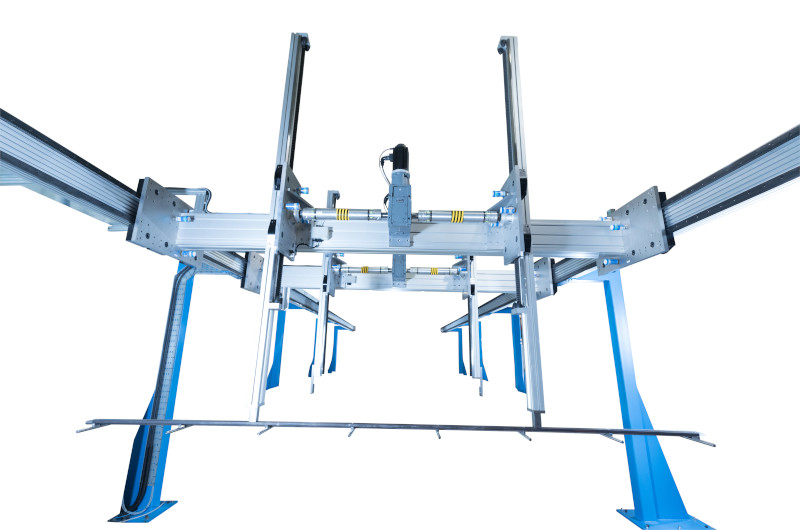 Linear motion expert HepcoMotion has recently installed a rack driven HDS2 X-Z gantry system in its own factory to provide a multi-station chemical finishing dipping plant. Based on an overall payload of 700kg with a nominal speed of 0.5m/s, this solution provides a long x-axis stroke of 14,000mm. The application is ideally suited to a gantry system as it needs to lift and load 4 metre slides into 7 separate dipping tanks. Two heads are utilised to provide stability manoeuvring the 4 metre lengths; a challenging shape and size that does not lend itself to a robot. Hepco’s HDS2 heavy duty linear guide with its wide range of V bearings and linear guides is ideally suited to this application, and Hepco’s scope of supply includes all mechanical elements such as legs, XZ beams, slide, bearings, rack & pinion, belt drives and cable chain, tailored to the individual needs of a customer.

In some cases, the work area needs to increase after the system has been operational for some time and one of the key advantages of a gantry system is that the length can be extended to increase flexibility or future-proof existing installations. The need to increase production puts extra demand on existing systems and rather than invest in additional gantry, the preference is often to extend if at all possible. Other reasons for needing an extension could be due to the process or application changing.

With a gantry system, increasing the horizontal reach from 2m to 4m for example, is a relatively straightforward process requiring only a single axis to be extended to increase the stroke length. All other elements of the gantry remain the same with only one beam affected, making this solution simple and cost effective. HepcoMotion recently had this request from one of its customer’s, IAC Engineering, a large electrical integration and automation company based in South Wales. IAC Engineering had an application where their customer had requested additional vertical stroke after the system was in build. Hepco was able to provide a replacement for the Z-axis beam only, which extended the stroke as required. The remainder of the system was unchanged, demonstrating the flexibility of the Hepco solution. An industrial robot in the same situation would likely require a complete replacement.

Although it is possible to buy robots that have extended axis to allow a longer reach, this affects the robot’s payload so extending an axis isn’t always the best solution. Under most circumstances, to extend the reach of a robot and keep the same payload, the customer would need to go to the next size robot, incurring significantly greater cost.

For maximum efficiency any system installation must offer low ongoing maintenance costs. This is particularly relevant for high duty applications, covering long distances with heavy loads. Systems that can deliver continuous operation, without the need to be regularly stopped for routine maintenance such as re-lubrication, are highly valued by designers and production engineers alike.

Hepco’s gantry systems are based on its precision V guide technology. Hepco’s V guide system has a unique wiping action that expels debris, making it perform particularly well in the harsh, industrial environments that gantries are often used in. The outer diameter of the bearing travels at a faster speed than the inner diameter. The difference in speed causes particles nearer the centre to move outwards to the periphery, and to be expelled. Due to the geometry of the slide and bearing interface, debris is expelled to the outer diameter of the bearing in a spiral motion, away from the running surface.

When maintenance is required, the customer wants to know that the process is simple and will not impinge too much on production time. All bearings used in Hepco’s HDS2 gantry carriages are the removable type and can be dismounted from the carriage without the need to remove the carriage from the end of the axis. This means the whole process is very quick and can be achieved with minimal downtime. Under lubricated conditions, there is also no need to change the guide. Changing bearings and pinions is comparatively straightforward and can easily be done by the customer’s in-house maintenance team. Robot integrated solutions typically need to be repaired by a specialist – not only resulting in additional cost but also extra inconvenience.

Manufacturing new products on an existing assembly line is a frequent challenge that customers face and often goes hand-in-hand with the desire to integrate an automated gantry or robot into the system. As a robot is fully programmable, it can be challenging to integrate into an existing system. A gantry system however, is more simple and cost effective to integrate. Many existing machine solutions are driven via simple PLC controls and can prove challenging and costly to integrate the complex control systems of a 6-axis robot. Conversely a 3-axis gantry system will often pair with the existing controller and can be completely integrated within existing machine functions.

As gantries are mounted overhead, or sometimes below the work envelope, they offer the added benefit of saving valuable floor space, resulting in a more efficient work envelope than the traditional industrial robot. Where space is a premium, this is particularly relevant, more-so when the space for the robot guarding also needs to be considered. Gantries also allow greater access to workstations. With manufacturers focussed on reducing downtime to maximise productivity, the ability to access workstations quickly is a clear benefit.

In summary, if the application doesn’t require complex motion which would need the 6 degrees of freedom, there is a good chance a gantry could be advantageous, particularly when handling heavy loads across larger working areas.

Why adding too much grease makes Bearing Failure more likely