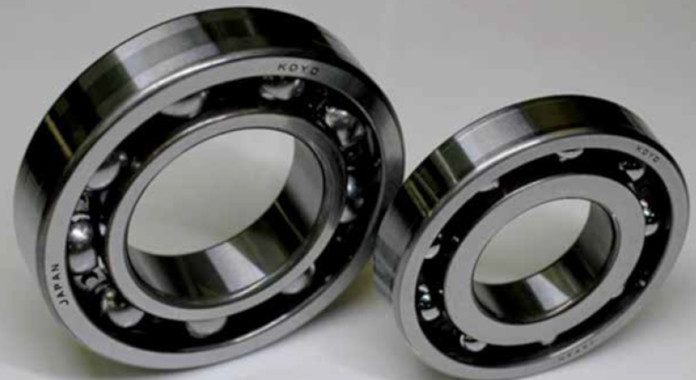 Koyo Bearings, a division of JTEKT Corporation, is introducing a new range of
ball bearings with creep-resistant features to reduce housing wear and extend
component life. The design lends itself well to installation in next-generation
vehicles, in particular in the transmissions of hybrid vehicles (HV/PHV) and
electric vehicles (EV/FCV), as well as continuously variable transmissions
(CVTs) in conventionally-powered cars.

What exactly is bearing creep?

Bearing creep is a phenomenon whereby the inner or outer ring rotates in relation to the housing or axis during operation. A pinch point forms and as the balls pass over it on each rotation it moves. It’s undesirable because it causes accelerated wear, discolouration and scuffing. If that wasn’t bad enough, if a bearing tilts on its centre line axis it can lead to problems like excessive noise, poor gear engagement or even catastrophic failure of a whole system.

There are two types of creep: strain and corotation. In the first type, a large unidirectional radial load causes circumferential strain on the outer ring, resulting in a small, slow moving area of strain. In the second type, which can occur when loads are light, rotational torque causes the outer ring to move due to insufficient friction between it and the housing. This is also potentially very destructive and the creep speed can be much higher.

How is bearing creep prevented?

Various measures have been tried in the past, such as using a thicker outer ring or a more solid lubrication film, however there are size, weight and cost implications here. Simply altering the housing dimensions to tighten the fit causes more problems than it solves as this excessively preloads the bearing’s internals causing heat, friction and wear. Also this approach often doesn’t work where an aluminum housing is used due to the material’s thermal properties. So in 2016 JTEKT decided to approach the problem from a new angle, developing the New Structure Anti-Creep Ball Bearing.

The design features a circumferential groove in the centre of the outer ring’s outside diameter to tackle the strain creep. To be sure of the perfect contour, the company conducted extensive CAE analysis using a simulation model based on the actual test device which was used to check the results. Results were confirmed by a video analysis.

The research proved that the design offers an equivalent to an increase in bearing thickness by 35%, which could equate to a 50% reduction in housing wear.

In addition to this groove, JTEKT engineers recently developed a new special coating to be used around the entire outer ring which is able to suppress housing wear caused by co-rotation creep.

This clever combination means the bearing can perform like an equivalent with a thicker outer ring, but without the size and weight penalty. This is particularly important for industries like automotive, but also increasingly important in various other industries like machine tool manufacturing where creep-related wear can be problematic. JTEKT has also noticed increasingly strict requirements in other industries too, such as agricultural and construction equipment. By saving on material, the design also keeps costs down.

These enhanced features mean the bearings are more durable and longer lasting, giving the products they are installed into a longer life, exactly what OEMs look for when ordering components from suppliers.

For further general information on Koyo’s products; please do not hesitate to contact your local Koyo office or Koyo distributor. You can also visit our European website: www.koyo.eu. For more technical details about ball bearings with anti-creep features we refer to the JTEKT Engineering Journal from May 2017 and May 2019, which can be obtained via our global website: www.jtekt.co.jp

Interview: a Tradition of Innovation for Mounted Bearing Units

The Man who will lead the EPTDA through the storm...

Configurators for engineers: Focus on machine design – not on bearing...