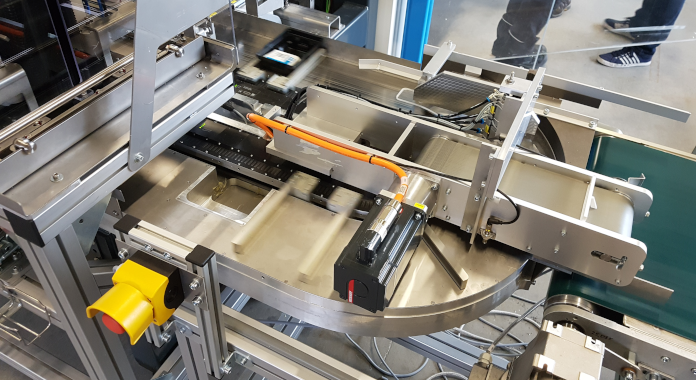 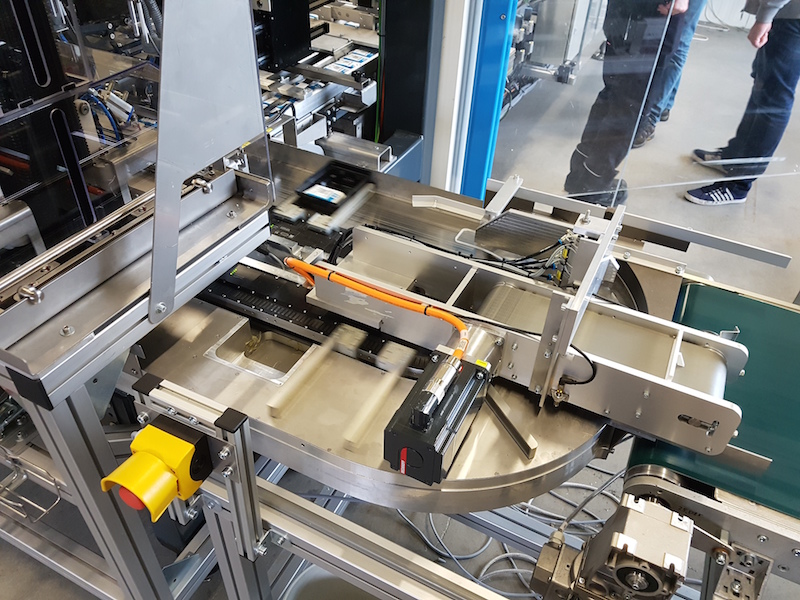 Downtime can be a manufacturer’s worst nightmare, especially if a line cannot be returned to operation within a short period of time. When Dutch machine builder Smart Automation was commissioned by one of the world’s leading printer cartridge manufacturers to develop a machine that fully automates the packaging of a wide variety of cartridges, it was essential to build a robust and durable cell.

At first glance, the packaging of printer cartridges may seem a simple task. However, the specification required the machine to process six standard configurations of packaging formats and contents, including four different combinations of printer cartridge. It was also important to offer the ability to switch between configurations within a matter of minutes. “Bringing together so much complexity in a single machine was a particular challenge for us.” explains the mechanical engineer.

Until now, Smart Automation had used a separate packaging machine for each specification of printer cartridge. In terms of time and efficiency, this was not optimal. 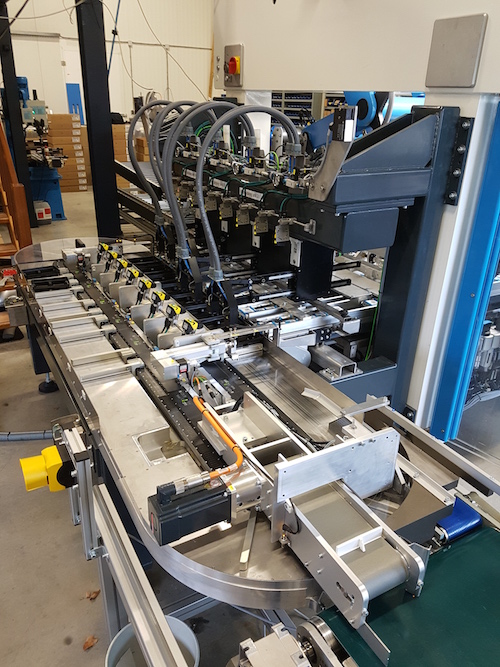 Smart Automation managed to meet their challenge through the creative combination of modern technologies. Even an old machine frame could be recycled for the cell. “We learned a lot from the project and, whilst there are some aspects we would approach differently a second time round, we are very satisfied with the overall result,” says the Dutchman.

On four moving belts, one per colour, cartridges for Black, Cyan, Yellow and Blue are fed through a sorter to the cell, where cartridges are filled. Here, four robots pick up two rows of between four and nine cartridges each, and place them on two parallel transport rails, according to the arrangement required for each configuration. Four grippers, specially designed by Smart Automation, pick up two cartridges per second and place them in a tray on the conveyor. During this process, a digital barcode scan ensures the correct colours are placed in each tray. A maximum of 480 cartridges per minute can be processed in this way. 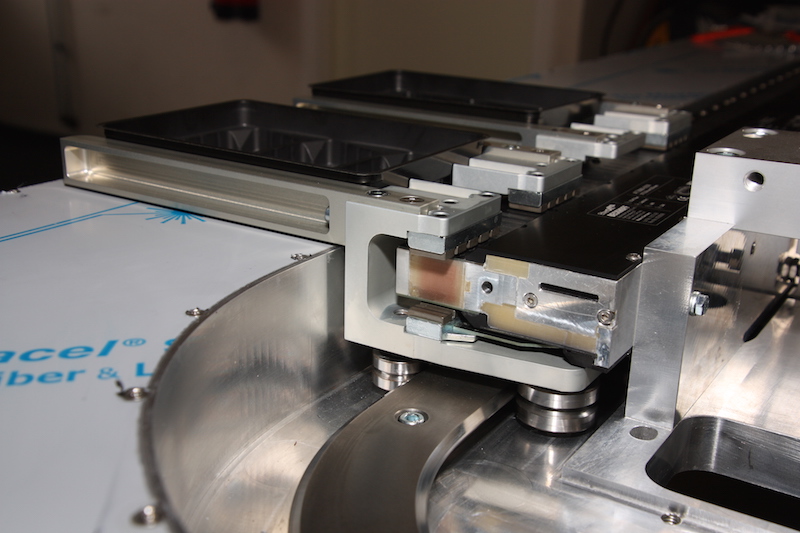 A key feature of the machine is the ability to quickly change product configurations. This is made possible by the use of the Beckhoff eXtended Transport System (XTS) and HepcoMotion’s GFX Guidance System for XTS (using Hepco’s 1-Trak system), which uses individually controlled movers to transport products from point to point.

The total length of the XTS system in the machine is 5m, on which a total of 32 movers travel. Hepco’s 1-Trak system comprises of two straight linear V-guides and two clothoid-shaped end segments. Unusually for this construction, the trays are not directly mounted to the movers, but are supported by the base plate and pushed from position to position by a series of pushers mounted on each mover. 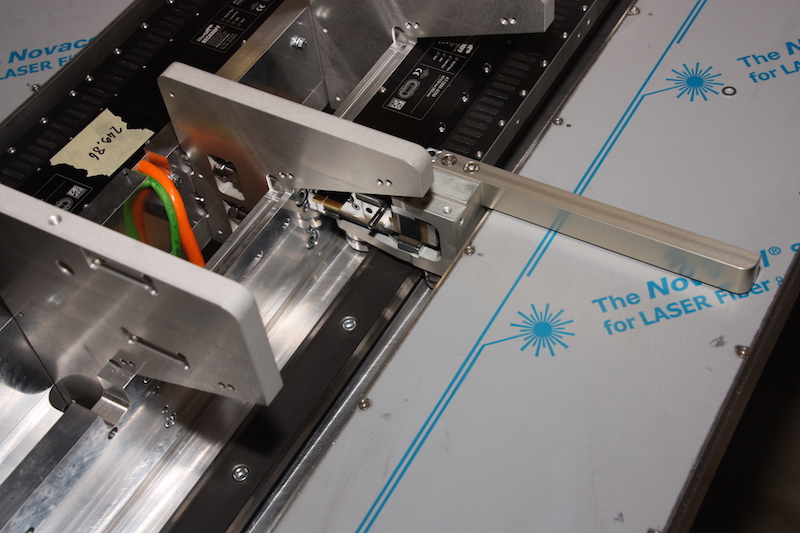 To facilitate this construction, the GFX system is mounted continually on an oversize base plate, making access to the guide rail and three-bearing movers difficult. This is one of the reasons it was so important for the system to operate for a significant period of time before readjustment and maintenance were required. To aid this, an automatic lubrication system was integrated into Hepco’s GFX system. More importantly, the designers wanted to ensure the three-bearing movers would not need to be readjusted for as long as possible. “With the long pushers on each mover, the centre of gravity is relatively far from the centre of the mover. Combined with the speed of movement, this applies a torque to each mover, which presents a major challenge in terms of the usable life of the guides,” Mulder explains.

“This meant we needed to adjust our performance and lifecycle calculations to make accurate product lifetime predictions,” adds Jason Cox, Technical Sales Manager at HepcoMotion, who oversaw the project. 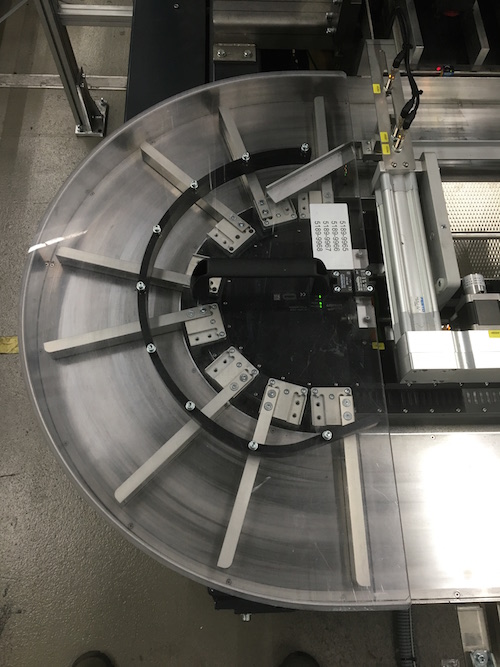 “In order to achieve the maximum service life, we tested a number of different motion profiles and designed the base plate in close consultation with Smart Automation,” says Cox. “Normally, we would reduce acceleration to extend the lifetime of our V guides, but the unusual design of the application and the frequent start/stop movements meant we needed to rethink this,” he explains. The solution was to maximise acceleration and reduce top speed. The reduction in top speed in this case caused a reduction in the centrifugal loads, which in turn extended the life of the V guides. The optimum top speed was determined to be 2.13m/s, with a load of 0.293kg and finger length of 52mm. “While Hepco initially sought a 10-year lifetime for its V guides, in the end we had to settle for 5 years as the resulting moment load on the system was high. Whilst this is less than initially sought, it is suitable for our needs,” Mulder explains.

Perhaps not surprisingly, the development of the machine took 18 months. Quite a bit longer than usual. “For me, time is not the most important factor, but the quality and the guarantee that it works. Hepco only released their design when they were convinced it was suitable for the application, and that was the most important thing for me. For a year now, the machine has been with the end user and works to their complete satisfaction.”