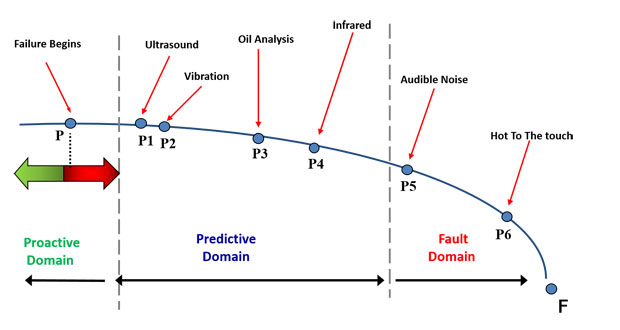 Airborne and structure-borne ultrasound is a technology that has been around for more than 50 years. In the technology’s early days, the main application was compressed air leak detection. Even today, that is still the most widely used application for airborne ultrasound. Advancements in leak detection using ultrasound have come by way of reporting and documenting the air leaks that are found. The reports quantify the air leaks by showing the cost and CFM loss related with the air leak.

Over the years, through advancements in both ultrasound instrumentation and software, more maintenance and reliability personnel have begun to use ultrasound technology for more than just compressed air leak detection. Two applications in particular have seen a large increase in usage: condition monitoring of bearings and rotating equipment and condition based lubrication using ultrasound.

Ultrasonic equipment detects airborne and structure-borne ultrasounds normally inaudible to the human ear and electronically “transposes” them into audible signals that a technician can hear through headphones and view on a display panel as a dB level. On some instruments, incoming sound can also be viewed on a spectral analysis screen which shows either the FFT or Time Wave Form. With this information, a trained technician can interpret the bearing condition in order to determine what, if any, corrective action is needed, and the current data can be compared on the spot to the baseline data.

Ultrasound technology has many advantages:

Airborne and structure-borne ultrasound instruments are an extension of the user’s sense of hearing. Similar in that vibration feels what you can’t feel and infrared cameras see what you can’t see, ultrasound hears what you can’t hear. There are sounds taking place in a typical plant and manufacturing environment (machines running, production equipment running, etc.) that prevent us from hearing other sounds such as compressed air leaks, or electrical discharges like corona, tracking, or arcing. Ultrasound instruments listen for sounds that are not present in our normal audible range.

Why remote monitoring with ultrasound?

Remote monitoring with vibration analysis and temperature has been available for many years. For ultrasound, it’s a fairly new addition to the technology’s repertoire of capabilities. When considering adding ultrasound to your condition monitoring program, the decision ultimately depends on what assets you would like to monitor. Once you have determined the assets that you would like to monitor, you need to identify the failure modes related to those assets. Understanding how those assets will fail will help you to determine which condition monitoring tool can be applied to find those failure modes.

Ultrasound is a proven technology that can detect certain mechanical and electrical faults much sooner than other technologies. By sensing subtle changes in ultrasonic amplitude, ultrasound is adept at finding early stage premature bearing faults. This is demonstrated by the I-P-F Curve:

I-P-F Curve showing ultrasound as an early indicator of a potential problem in bearings and rotating equipment.

When a bearing lacks lubrication, there is an increase in friction. The higher friction also increases how much ultrasonic noise the bearing produces, indicated by a rise in the decibel (dB) level. While greasing a bearing that is need of lubrication, one should see a gradual decrease in the dB level. Once the dB level has fallen back to a normal or baseline level, greasing can be ceased. If the bearing already has a sufficient amount of grease when greasing, then the dB level will slowly begin to rise as more grease is applied. That’s because over-lubrication also increases friction in the bearing housing, thus producing a higher dB level. The inspector would notice the rise in dBs as grease is applied and would stop greasing.

In the P-F interval once a failure has begun, ultrasound is excellent at finding it. These are bearing failures that can be detected even before changes in vibration. If you’re monitoring critical assets, ultrasound and vibration should be used together in an effort to potentially detect multiple failure modes that may be missed when only using one technology alone.

Remote monitoring of bearings and other rotating equipment with ultrasound can be done one of two ways:

The first is to use wired remote access sensors (RAS) which are mounted to the assets when it is safe to do so, and the cables brought out to a safe area (outside of guarding) where they can be connected directly to a portable hand-held ultrasound instrument. The cable lengths for the ultrasound remote access sensors can be made to lengths up to 100 feet or 30.48 meters.

A remote access sensor with cable mounted to the outboard bearings on a motor (left). The other end of the RAS cable connected directly to a portable hand-held ultrasound instrument (right). 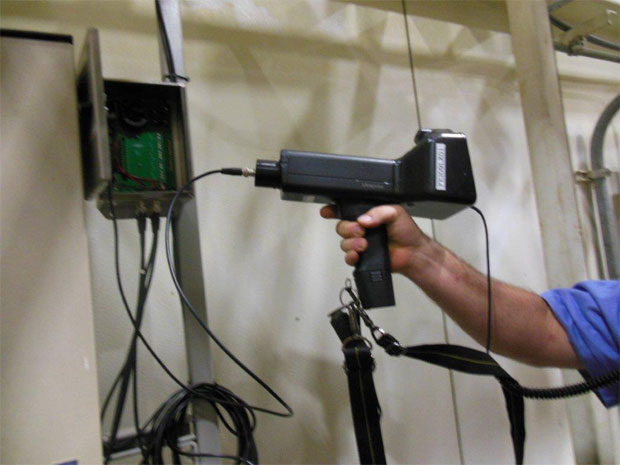 The above image shows an ultrasound instrument connected to a four channel switch box.

Remote monitoring with ultrasound can also be done continuously. For continuous monitoring with ultrasound, UE Systems offers a sensor called an Ultra-Trak 750. This is another stud-mounted sensor, but instead of connecting directly to a hand-held ultrasound instrument, this sensor has a 4-20mA output that allows for easy connection to existing plant process monitoring systems. An audio output also allows for sound recording for further diagnostics or comparing baseline sound files to alarm level sound files. Alarm levels and dB threshold settings can be used with the Ultra-Trak sensor that allow for alarm conditions to be noted and for trending potential problems over time. Ideal applications for this sensor could include: high pressure safety relief valves, robotic applications, early warning of failure for a mechanical asset, flow disruption, and prompting a lubrication PM. The Ultra-Trak can also be wired into wireless transmitters to transmit the ultrasound data into existing monitoring systems. The wireless option may be ideal for areas that cannot be accessed due to safety, or areas that are hard to reach such as overhead cranes, bearings in wind turbines, robots, or remote assets away from the main plant or facility.

Remote monitoring with ultrasound is a viable option for maintenance and reliability programs that are already monitoring assets traditionally with hand-held devices, and for programs where ultrasound is currently not a technology that is being used. Because it is very complimentary to vibration analysis for mechanical inspection and infrared thermography for electrical inspection, ultrasound will only enhance condition monitoring efforts already in use. Using ultrasound for mechanical inspection will deliver an increased level of monitoring for critical assets and assets that are currently not being monitored with vibration analysis or other condition monitoring technologies. Anywhere you would consider using traditional data collection techniques, remote monitoring can be a viable option as well. In areas that are inaccessible, dangerous, or remote, remote monitoring with ultrasound may be your only option. Additionally, a multi-technology approach to condition monitoring increases your chances of finding multiple failure modes and detecting them early enough to make the necessary repairs before they become catastrophic.