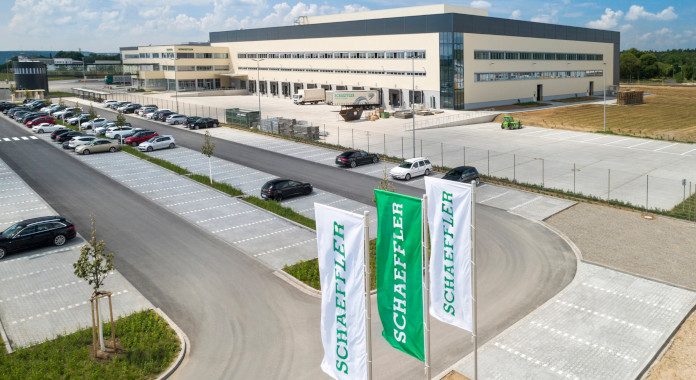 Global automotive and industrial supplier Schaeffler has presented its interim statement for the first nine months of 2022. The Schaeffler Group’s revenue for the reporting period amounted to 11,790 million euros (prior year: 10,346 million euros). The 8.7 percent constant-currency growth in revenue compared to the prior year period was largely attributable to higher volumes. Successful price realization at all three divisions further bolstered the revenue trend since considerable rises in input costs were increasingly passed on to the market. Revenues for the third quarter of 2022 rose strongly by 20.2 percent at constant currency to 4,242 million euros (prior year: 3,332 million euros).

All regions contributed to revenue growth during the reporting period. Especially the Europe and Americas regions reported considerable constant-currency growth for the first nine months of 11.2 and 11.8 percent, respectively. While revenue declined in the Greater China region in the second quarter due to lockdown measures imposed to contain the coronavirus pandemic, revenue growth for the nine-months reporting period there returned to 2.7 percent at constant currency. The third-quarter sales grew 24.8 percent in constant-currency terms following an 12,5 percent decrease in the prior quarter. The Asia/Pacific region contributed constant-currency revenue growth of 6.0 percent.

“In the first nine months Schaeffler delivered good results, despite the difficult environment. All divisions succeeded in passing the higher input costs on to the market. Our cost and capital discipline are key in ensuring competitiveness and improving profitability,” stated Claus Bauer, CFO of Schaeffler AG.

The Board of Managing Directors of Schaeffler AG has decided to take additional structural measures in the Automotive Technologies division in order to further improve its competitive position and reduce fixed costs.

Further details are available in another press and IR release that will be issued following the issue of this release. 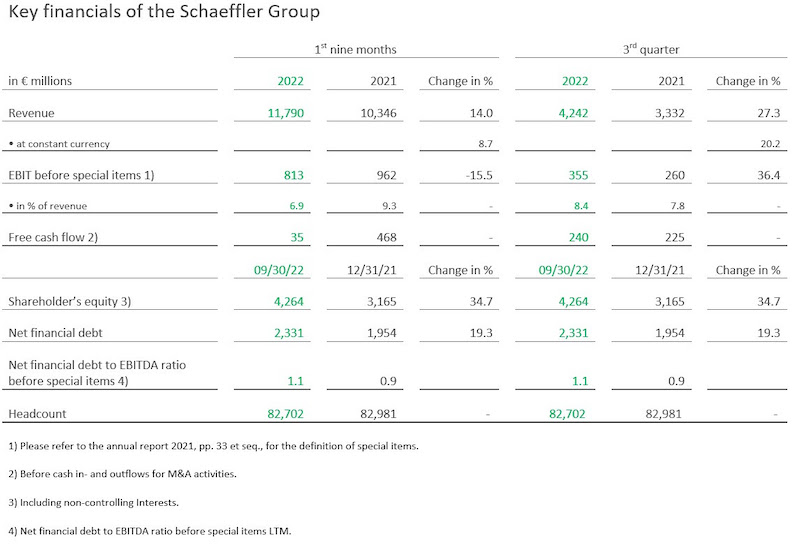 The Automotive Technologies division reported 7,070 million euros in revenue for the first nine months of the year (prior year: 6,286 million euros). Its constant-currency revenue growth of 7.0 percent was mainly driven by the strong increase in volumes in the third quarter of 2022 and was slightly less than the 7.5 percent growth rate of global automobile production. The division increasingly succeeded in passing on sharply increased input costs.

During the first nine months, revenue increased across all business divisions (BDs) and regions with the E-Mobility and Chassis Systems BDs generating the highest constant-currency growth rates at 28.4 and 28.1 percent, respectively. The division’s order intake totaled 9.7 billion euros including 4.7 billion euros relating to the E-Mobility BD.

Automotive Aftermarket strong on the back of high market demand


The Automotive Aftermarket division reported 1,516 million euros (prior year: 1,411 million euros) in revenue for the first nine months of the year, representing constant-currency revenue growth of 4.0 percent. This growth was mainly driven by favorable adjustments to sales prices, as the division succeeded in largely passing the considerably increased input costs on to the market. Partly due to the continuously increasing vehicle population and average vehicle age, demand for replacement parts remains high, especially in the Independent Aftermarket business. The division succeeded in compensating for the revenue decline in the Central & Eastern Europe subregion attributable to the war in Ukraine with growth in other markets.

These developments resulted in EBIT before special items of 198 million euros (prior year: 207 million euros), once more delivering a strong contribution to group earnings. This represents an EBIT margin before special items of 13.1 percent (prior year: 14.7 percent). This decline compared to the prior year was mainly attributable to an increase in selling expenses due to primarily to favorable one-off items in the prior year period. As adjustments made to sales prices largely offset the considerable increase in input costs, the gross margin was only slightly less than in the prior year period.

The Industrial division generated a total of 3,205 million euros in revenue (prior year: 2,649 million euros) for the reporting period. At constant currency, revenue grew by 15.0 percent. This growth was especially attributable to the strong increase in volumes. Successful price realization had an additional favorable impact on revenue growth. The increase in volumes was mainly driven by the Europe region which saw demand expand considerably compared to the prior year period, primarily in Industrial Distribution and in the Industrial Automation sector cluster. The wind sector cluster reported a very strong third quarter of 2022 once more and again contributed more revenue in the first nine months than any other sector cluster.

The third quarter also saw the signing of an agreement to acquire the Ewellix Group. The acquisition of the global manufacturer and supplier of linear technology components and systems improves Schaeffler’s market position, particularly in the linear business. It follows the acquisition of Melior Motion at the beginning of the year, further strengthening the Industrial Automation sector cluster. The acquisition is expected to close in the first quarter of 2023. 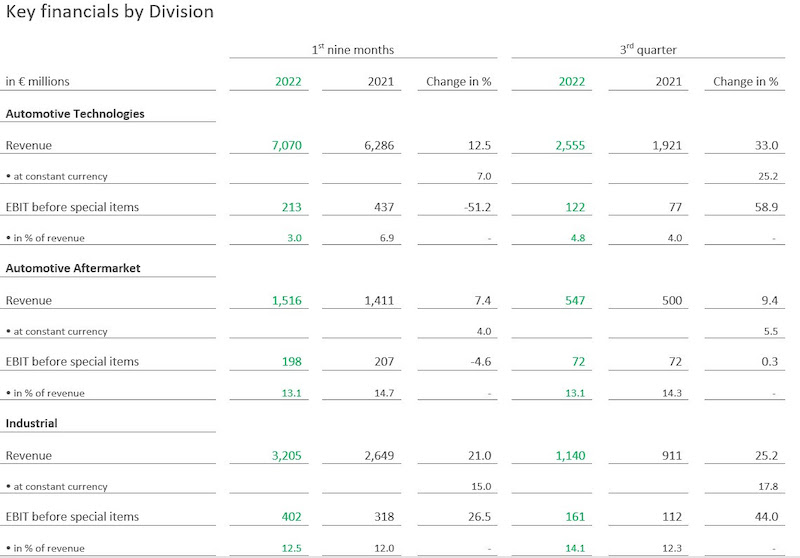 
At its meeting on November 2, 2022, the Board of Managing Directors of Schaeffler AG has confirmed the outlook based on the encouraging performance during the first nine months. The Schaeffler Group continues to expect its revenue to grow by 6 to 8 percent excluding the impact of currency translation in 2022. In addition, the company expects to generate an EBIT margin before special items of 5 to 7 percent in 2022. The Schaeffler Group anticipates free cash flow before cash in- and outflows for M&A activities for 2022 of more than 250 million euros.

“The Schaeffler Group has generated encouraging results for the third quarter in a persistently difficult environment. Primarily our Automotive Aftermarket and our Industrial business turned in a convincing performance with strong revenue growth and high EBIT margins before special items. In Automotive Technologies, the increased order intake of 4.7 billion euros in the E-Mobility business division impressively emphasizes that we are continuing to expand our market position in this key business,” said Klaus Rosenfeld, CEO of Schaeffler AG.