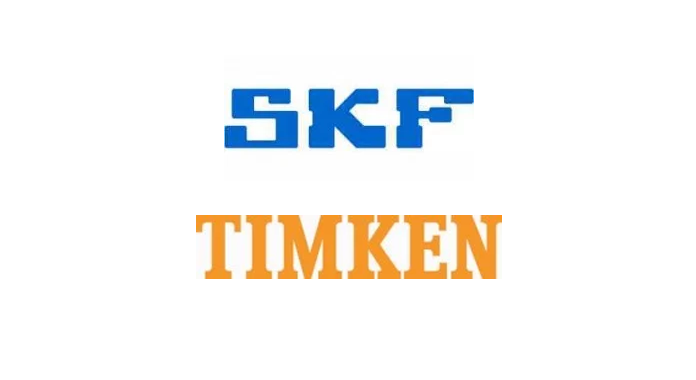 Alrik Danielson, President and CEO:
“2019 has been a solid year for SKF. We saw stable demand during the first half of the year. During the last six months, we maintained a strong operating result, despite falling demand. A consistent focus on cost reduction, especially during the fourth quarter, where cost reductions more than compensated for cost inflation, has allowed us to continue to deliver solid results, whilst continuing to invest in our factories and in R&D.

The industrial business delivered an underlying margin of 13.3%, higher than last year (12.9%), despite a drop in organic sales of 1.2%. Sales were significantly higher in Asia, relatively unchanged in Europe and Latin America and significantly lower in North America.

The automotive business delivered an underlying margin of 2.4% (3.8% last year), due to a fall in organic sales of 7.5%. Sales were significantly lower in Europe and North America, lower in Asia and significantly higher in Latin America.

During the fourth quarter we have taken steps to create a more efficient structure for our support functions. The new way of working and resulting organizational changes are being implemented during 2020-2021 and will see the creation of regional centers of excellence.

Investments supporting our regional manufacturing strategy continue as planned and the recently announced ball bearing factory in Xinchang is ramping up production during the first quarter, as announced in June 2019.

The testing of our bearings with fibre optical load sensors has moved over to the next stage, with equipped large-size bearings soon to be deployed to a mine in northern Sweden. These bearings analyze loads in real-time, giving customers and SKF even more insights into the performance of rotating machinery.

In the first quarter of 2020, we expect to see lower volumes for the Group, slightly lower for Industrial and lower for Automotive, compared to Q1 2019.

SKF is well-positioned for the future. We have a track record of strong financial performance, which has enabled us to pay down debt and increase investments in manufacturing and R&D during 2019. In recognition of this, the Board has proposed to increase the dividend to SEK 6.25 per share.” 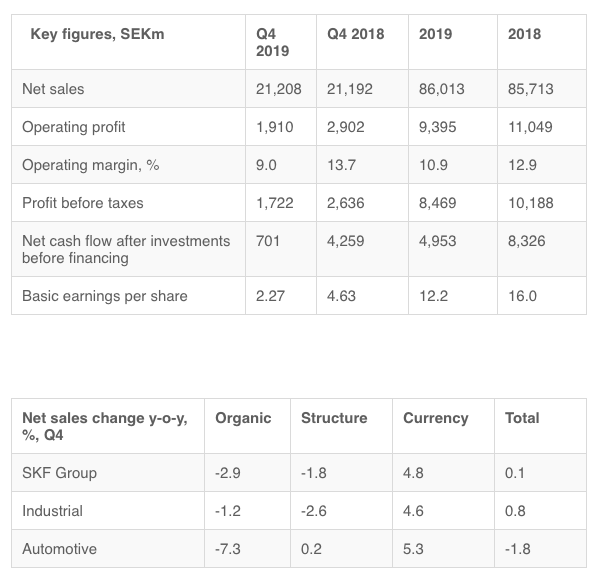 The Timken Company, a world leader in engineered bearings and power transmission products, today reported fourth-quarter 2019 sales of $896.2 million, down 1.5 percent from the same period a year ago. The decline was driven by lower demand mainly in the Mobile Industries segment and unfavorable currency, partially offset by the favorable impact of acquisitions and positive pricing.

Net cash from operations for the quarter was $195.3 million, and free cash flow was $137.6 million. During the quarter, the company returned $27.7 million in capital to shareholders with the payment of its 390th consecutive quarterly dividend and the repurchase of more than 150 thousand shares.

“Fourth quarter revenue was in line with our expectations and cash flow finished the year strong. While profitability fell short, a significant portion of this related to some higher than normal operating expenses in the quarter that are not expected to persist,” said Richard G. Kyle, Timken president and chief executive officer. “In 2019, Timken delivered record earnings per share, operating margin expansion and solid revenue gains in sectors like renewable energy, aerospace and rail. Our strong financial performance in a relatively soft industrial market environment demonstrates the successful execution of our strategy. Our performance in 2019 underscores the enduring strength of our portfolio and reflects a stronger, more diverse Timken Company.”

For 2019, sales were $3.8 billion, up 5.8 percent compared with 2018. The increase was driven by the favorable impact of acquisitions, positive pricing and organic growth in Process Industries, partially offset by unfavorable currency and the impact of lower demand in Mobile Industries.

Net income was $362.1 million or a record $4.71 per diluted share for the year, compared with net income of $302.8 million or $3.86 per diluted share a year ago. The year-over-year improvement reflects favorable pricing, the benefit of acquisitions, and the impact of a lower tax rate driven by net discrete benefits, partially offset by the impact of lower volume, unfavorable currency and higher interest expense. The current period also benefited from pension and other retirement plan remeasurement income versus expense in the year-ago period.

Timken generated strong cash flow in 2019, with net cash from operations for the full year of $550.1 million, and free cash flow of $409.5 million. The company ended the year with net debt to adjusted EBITDA at 2.1 times.

During the year, the company continued to broaden its reach through acquisitions. The addition of BEKA Lubrication (BEKA) makes Timken the world’s second largest producer of industrial automatic lubrication systems1, and enhances the company’s position in attractive markets such as wind and food and beverage. Diamond Chain expands Timken’s leadership in high-performance roller chains for industrial markets and builds on the company’s strong position in distribution. Together these acquisitions also expand the company’s global presence in growing markets, especially in China and Europe, and both are expected to deliver significant cost and revenue synergies over time. Additionally, Timken paid dividends totaling $1.12 per share in 2019, which represents its sixth consecutive year of annual dividend increases, and repurchased over 1.4 million shares of stock. Between dividends and share repurchases, the company returned a total of $148 million to shareholders in 2019.

Mobile Industries sales of $445.1 million decreased 3.6 percent compared with the same period a year ago. The decline was driven primarily by lower shipments in the off-highway and heavy truck sectors, partially offset by the benefit of acquisitions and growth in the rail and aerospace sectors.

Earnings before interest, taxes, depreciation and amortization (EBITDA) in the quarter were $57.5 million or 12.9 percent of sales, compared with EBITDA of $61.1 million or 13.2 percent of sales for the same period a year ago. The decrease in EBITDA reflects the impact of lower volume and higher manufacturing costs, partially offset by favorable price/mix and lower material and logistics costs.

Process Industries sales of $451.1 million increased 0.6 percent from the same period a year ago, driven primarily by the favorable impact of acquisitions and strong growth in renewable energy, mostly offset by lower revenue in the industrial and marine sectors and unfavorable currency.

EBITDA for the quarter was $96.8 million or 21.5 percent of sales, compared with EBITDA of $101.2 million or 22.6 percent of sales for the same period a year ago. The decrease in EBITDA was driven by the impact of lower volume, unfavorable mix and higher operating expenses, partially offset by favorable pricing.

The company expects 2020 revenue to be in the range of down 2 percent to up 2 percent, or roughly flat at the midpoint, versus 2019. This includes the benefit of acquisitions made during 2019, offset by expected organic declines in Mobile Industries and the impact of currency.

Timken anticipates 2020 earnings per diluted share to range from $4.00 to $4.40 for the full year on a GAAP basis. Excluding special items detailed in the attached tables, the company expects 2020 adjusted earnings per diluted share ranging from $4.25 to $4.65. Timken plans to generate net cash from operations of approximately $585 million and free cash flow of $425 million at the midpoint in 2020.

“We plan to deliver another strong year of cash generation and solid earnings performance in 2020 against a soft industrial economic backdrop,” said Kyle. “We expect profitability to improve meaningfully from fourth-quarter levels, and we remain focused on driving outgrowth, integrating recent acquisitions and advancing our operational excellence initiatives. With our proven strategy and track record, we are confident in our ability to achieve our new five-year targets and deliver attractive shareholder returns for years to come.”

Timken will host a conference call today at 11 a.m. Eastern Time to review its financial results. Presentation materials will be available online in advance of the call for interested investors and securities analysts.