As maintenance and reliability professionals, we must ensure that the assets that we are responsible for are operating as they were designed and installed for. The hope is to move more towards predictive maintenance rather than reactive maintenance when a machine fails. It has been proven that when plants and facilities have a robust proactive maintenance program, that facility will operate more safely, with less downtime, and with improved product quality.

Maintenance and reliability professionals have tools at their disposal to use to monitor asset health on a routine basis. Similar to the way a doctor may use a stethoscope to listen to a patient’s heartbeat, or a thermometer to measure the patient’s temperature, the maintenance and reliability professional uses condition monitoring tools that can help to assess the health of a mechanical asset.

Slow speed bearing monitoring with ultrasound is actually easier than you might think. Because most high end ultrasound instruments have a wide sensitivity range and frequency tuning, it is possible to listen to the acoustic quality of the bearing, especially at slower speeds. In extreme slow speed bearing applications (usually less than 25rpm), the bearing will produce little to no ultrasonic noise. In that case, it is important to not only listen to the sound of the bearing, but more importantly to analyze the recorded ultrasound sound file in a spectrum analysis software, focusing on the time wave form to see if there are any anomalies present. If “crackling” or “popping” sounds are present, then there is some indication of a deformity occurring. In bearing speeds above 25rpm, it is possible to set a baseline decibel level and trend the associated decibel level readings over time. 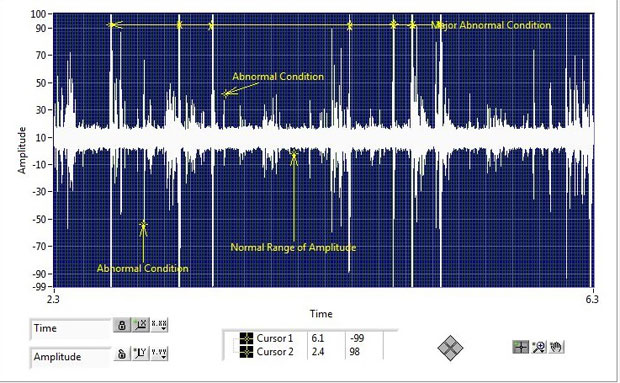 Bad Bearing: 1 rpm bearing on a furnace application. Note all of the anomalies that appear in the Time Wave Form from the “crackling and popping” sounds that were produced by bearing fatigue.

To get the most out of an ultrasound bearing condition monitoring program, it is best to establish routes for data collection. Through this effort, maintenance technicians can set baselines and bearing condition alarm levels. This approach is called the Historical Method. Using this method, the inspector first establishes a route in the ultrasound software of the points where the data will be collected. Once the route is created, the inspector loads the route into the ultrasound instrument. While collecting the initial data to build the history, the technician should record both the decibel level readings and the sound file recordings. It may also be necessary to collect the readings more frequently than necessary to establish the history until the baseline and alarm levels are set. Once the baseline has been established, alarm levels can be set. For most bearings, an increase of 8dB above baseline represents a lack of lubrication for that bearing. An increase of 16dB above baseline means the bearing is in a failure mode this is beyond just a lack of lubrication. For slow speed bearings, these alarm levels may need to be adjusted since slow speed bearings do not produce as much high frequency sound as bearings that are rotating at faster speeds. The alarm levels for slow speed bearings should be set according to what the initial historical decibel level trend shows.

Once the baselines and alarm levels have been set, it is only necessary to record the data or dB readings. From that point forward, a sound file recording is only taken once the point has reached either the low alarm, or the high alarm. The alarm level sound file recording can then be compared to the original baseline sound file. This is important in diagnosing what the current bearing condition is. In a spectrum analysis software, technicians may also be able to compare the baseline sound file FFT to either the current sound file, or compare up to as many as four identical points on four identical machines. 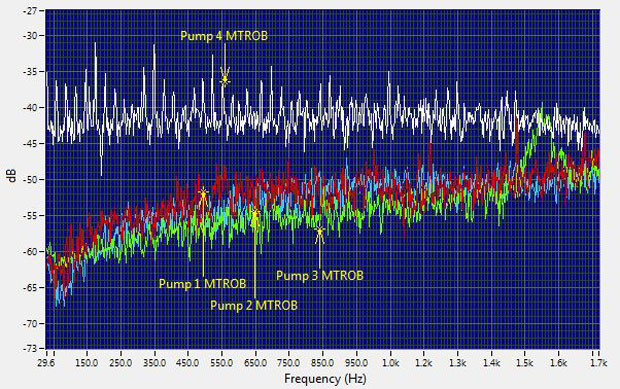 The concept is simple. It’s based off of friction. When a bearing is in need of lubrication, there is an increase in amplitude or the decibel level. If a technician is using ultrasound to listen to the bearing while greasing and watching the associated decibel level on the ultrasound instrument, if the bearing needs grease, there will be a gradual drop in the dB down to a more normal or baseline dB. At that point, the technician should stop lubricating. If the bearing is already sufficiently lubricated, the technician would start to see a gradual increase in the dB as grease is added. As more grease is added to an already sufficiently lubricated bearing, there is an increase in both pressure and friction inside the bearing housing; therefore, more noise. In this scenario, the technician should stop applying grease when an increase in dB is noted. If the technician is applying grease to a bearing, and there is no change in the dB, then a follow-up inspection with either recording the ultrasound sound file again, or a complimentary technology such as vibration analysis should be used to determine why the dB did not change during lubrication. If the bearing has physical damage, or is in a failure mode beyond a lack of lubrication, then there will be little to no change in the dB while greasing. 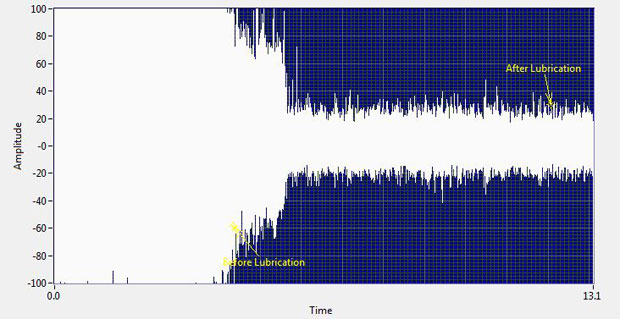 Time Wave Form view of a recorded ultrasound of a bearing properly lubricated. Note the amplitude before lubrication (left) and after lubrication (right).

Time Wave Form view of a recorded ultrasound of a bearing that has been over lubricated. Note the gradual rise in amplitude (right) as too much grease is added.

Airborne and structure-borne ultrasound instrumentation has become a must-have technology for any maintenance and reliability program. Due to its enhanced sensitivity and ability to detect slight changes in the amount of high frequency sound produced by rotating equipment, ultrasound is ideally suited to detect early stage bearing fatigue lack of lubrication in rolling element bearings. By translating the high frequency sound into the low frequency or audible range, these instruments allow the users to hear, see, and diagnose bearing faults. Through ultrasound assisted lubrication, bearing and machine life can be extended, and failures due to over or under lubrication can be eliminated.

The Secret of Polishing Bearing Rings