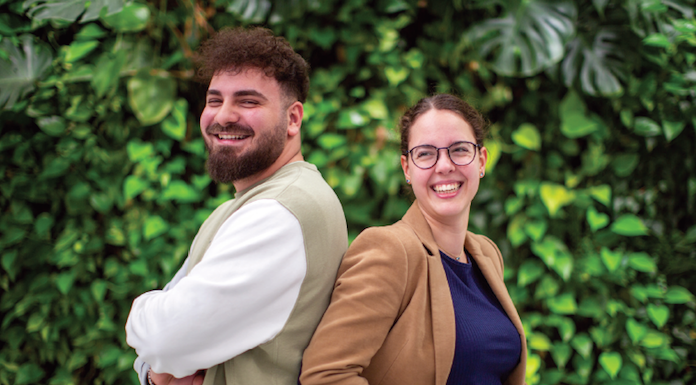 Annika and Ahmet are first-year apprentices with Friedrich PICARD GmbH & Co. KG in the city of Bochum in Germany’s Ruhr region. The expert in rolling bearings and linear motion technology provides on-site training in a variety of occupational fields, including logistics, business administration and IT.

Annika is training to be a wholesale and export management specialist while Ahmet is on his way to becoming a warehouse logistics specialist. Enrolled in a dual education programme, each is learning the practical side of the occupation he or she is training for directly within the company’s operational environment. Meanwhile, they receive the theoretical side of their apprenticeship education at a vocational school. We asked them about how they have fared in their first few months at PICARD.

Q: Why did you decide on this apprenticeship?

Annika: I was looking for an apprenticeship that matched my affinity for foreign languages with my outgoing and organised nature.

Ahmet: I chose this apprenticeship because I like to work within a team and because it’s important to me to be physically active. Because of my previous experience working in a warehouse, I was sure I wanted to do this apprenticeship.

Q: Why did you choose to do your apprenticeship with PICARD?

Annika: I decided on PICARD because everything clicked, from start to finish. Already during the interview, I felt welcome and much more relaxed than usual in this normally stressful situation. PICARD is also very internationally oriented and really values the importance of a diverse and multicultural work environment.

Ahmet: The decision was relatively easy for me because I had, of course, read up on PICARD beforehand and had checked out the company’s social media channels on YouTube and lnstagram, for example. I was immediately impressed by the videos there and decided I wanted to be part of the PICARD team.

Q: Did you know what a rolling bearing was before you applied for a job at PICARD?

Annika: No. In fact, the first time I’d ever heard of them was while watching a YouTube video in preparation for my apprenticeship interview.

Ahmet: Honestly, I have to admit that I didn’t know initially what a rolling bearing was or what one even looked like.

Q: Why is a rolling bearing at least as thrilling as an iPhone 13?

Annika: A rolling bearing is at least as thrilling as an iPhone 13 because no roller coaster could function without rolling bearings. And let’s be honest, who wants to live in a world without thrills?! And, in case you’re still sceptical, you probably couldn’t manufacture an iPhone either, if rolling bearings didn’t exist. Ahmet: The rolling bearing business is really fascinating because the products have such a wide variety of applications, due to properties that aren’t apparent to the naked eye, such as their varying heat resistances, maximum rotational speed loads, and degrees of high-precision performance. I’d also add that without rolling bearings and linear motion technology, there would be no iPhones, anyway.

Q: What has surprised you the most so far?

Annika: The thousands of different sizes and varieties of rolling bearings. There’s nothing that doesn’t exist and something for every application – from a 9-millimetre rolling bearing designed for skateboard wheels to one with a diameter of 900 millimetres that goes into wind turbines. Ahmet: What’s surprised me the most so far is the work itself – because I never considered how well everything in a warehouse has to be planned, organised and structured for customers to receive the goods they ordered.

Q: What is special about PICARD?

Annika: The company’s modern building with its many leafy green plant walls that create a special and fresh atmosphere, even on grey, drizzly days in November. I also find it remarkable that our 250-person team brings together people from 36 nations in one place.

Ahmet: The special thing about PICARD for me personally is that we supply the specialised trade for rolling bearings worldwide – for example to customers in Italy, Turkey and France. I think that shouldn’t be underestimated.

Q: Which area are you currently working in and what are your tasks?

Annika: For the first three months, I was assigned to the sales team and assisted Miriam and Luis, who are responsible for the Spanish and Portuguese markets. During the first few weeks, I mainly watched them work and had them explain and show me each of the process steps and tasks in the sales department. I was then permitted to take an active role, prepare offers, and handle customer enquiries. I also collaborated on a project to market our digital solutions. For the last two weeks, I’ve been working in the warehouse, where my main task is to pick customer orders and then pack the items safely for shipping.

Ahmet: At the moment I am working in the goods receiving department. We take care of unpacking the delivered goods, inspecting them, and storing them properly on the shelves.

Q: What did you expect from your training and have your hopes been fulfilled?

Annika: From my training at PICARD, I expected to learn a lot about rolling bearings, and hoped to be able to make active use of my foreign language skills, and to be given the opportunity to apply what I have learned independently. These expectations and hopes have been completely fulfilled. I’ve been offered numerous training courses on rolling bearings and have been able to directly apply my Spanish skills as part of the Spain and Portugal sales team.

Ahmet: When doing an apprenticeship, I think it’s important that the general atmosphere in the company is agreeable and positive, and that workmates get along with each other. It’s also very important to me that I do my work with enthusiasm and have fun at it – so I can feel good getting up i the morning to go to work. These hopes have all been fulfilled.

Q: What are your prospects after you finish your apprenticeship?

Annika: PICARD invests in its apprentices in order to offer them long-term opportunities, so I’d be delighted to stay with the company once I’m finished – preferably in sales for a foreign-language market. There’s also an opportunity to do a business degree, which would deepen and broaden my skill set.

Ahmet: Once you’ve completed the apprenticeship, you have plenty of prospects. On the one hand, we have a hiring rate of 95 per cent at PICARD, so I have a good chance of being hired here after my training. But I could also just as easily complete my master’s degree in warehouse logistics or even study further and then work as a technical business economist.