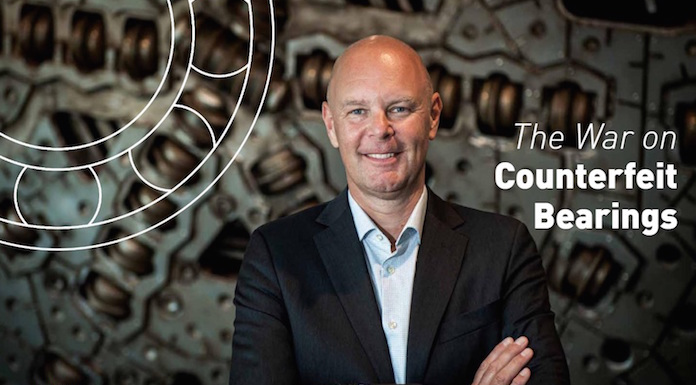 Counterfeit bearings are a major issue all over the world. The production and distribution of fake bearings routinely victimize both the end user and OEM, and above all else, can significantly jeopardize safety. This dangerous, illegal, and highly unethical practice is far more prevalent than most would assume, occurring in every market segment. Luckily, for consumers, and to the benefit of the entire industry, companies like SKF have taken their own initiatives to fight back.

In this interview, the Bearing News team speaks with Johan Bravert, the Director of Brand Protection at SKF to discuss the topic in more detail. Johan Bravert provides an overview of the actions being taken by SKF to combat this elusive practice. Learn how and why SKF dedicates significant resources towards stopping counterfeit bearings. From awareness campaigns designed to better inform customers, to teams of individuals working with authorities, SKF is determined to stop fake bearings. 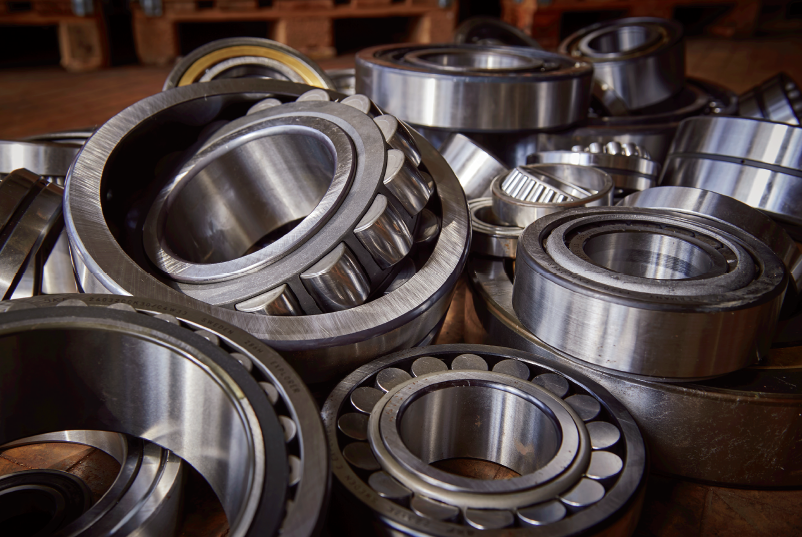 Can you please describe your role at SKF? What would you say the primary responsibility is for the Director of Brand Protection?

I am leading a team here at SKF with the main purpose of protecting SKF and its customers against counterfeit products. We are not limited to certain regions; we cover the entire world from our headquarters. We are taking legal action against producers and sellers of counterfeit bearings on a global basis. We initiate and drive awareness campaigns, and I would say that raising awareness is one of the most important areas to make people in the supply chain aware of counterfeit bearings and their risks. Helping customers to understand how they can protect themselves and avoid counterfeits is extremely crucial. That is the simplified main purpose of my role and my team in SKF.

What are counterfeit bearings? What are their negative effects and how do they impact the industry?

A counterfeit bearing is an illegal product, it is made by someone taking a product not produced by SKF and marking it with “SKF” or any other brand we own. The products are of unknown origin and unknown quality, so you really don’t know what you are getting. I think the biggest issue here is that customers believe they are buying a genuine SKF product and using it as if it is a genuine bearing that fulfils the expectations of a genuine bearing, , which can result in both unexpected failures in the applications, and in worst cases, it can even lead to human injuries if the bearing fails unexpectedly.

Where do counterfeit bearings come from?

We see counterfeit production in quite a lot of different countries. If we were to look at customs statistics for instance, it is quite clear that a lot of the customs seizures coming into both the European Union and the US originates out of China, however, we also see it originating from a number of other countries. I would say sometimes there is quite a lot of focus on where the counterfeits are coming from, however, the focus should be on where can you find counterfeit products, and there I would say you can find it in every single market. Historically, I would say not every country in the world, but we have supported law enforcement in performing raids against counterfeit sellers in most European countries, in the U.S., as well as many countries in Latin American, Africa and Asia. So, there are a lot of counterfeit products and it is not limited to certain regions, nor product types or sizes. It is not uncommon that we also find large size products, so it is not limited to small size bearings. 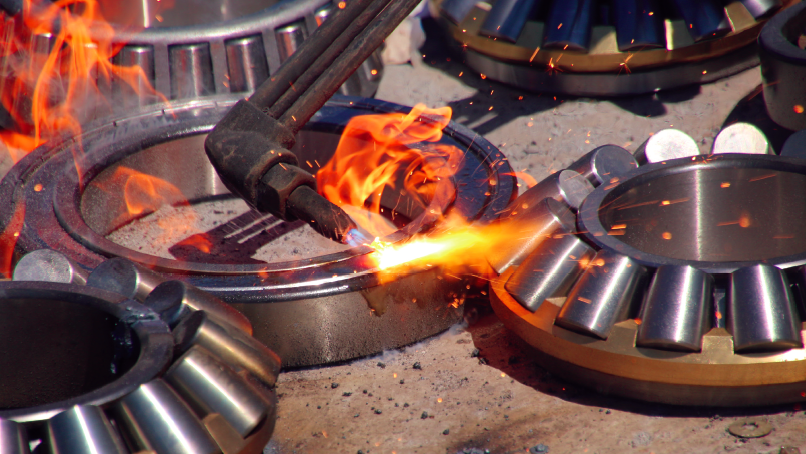 What tools and strategies are being implemented by SKF to stop fake bearings? What tools are most effective? 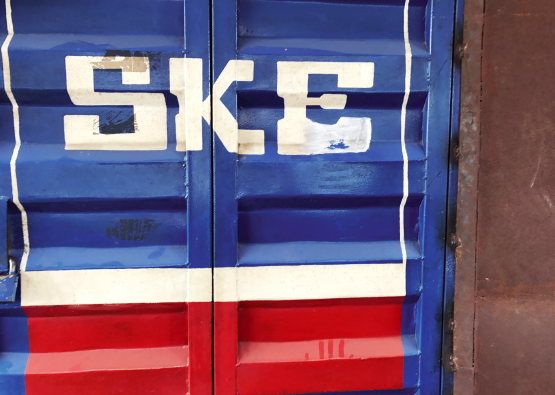 are risks to using them. Especially if you are using SKF or another premium brand, you very likely have a quite high demanding application. It can be high speeds, high temperature, high loads and so on. By installing a counterfeit bearing there are a lot of risks. That could be an unexpected failure that could cause you a lot of down time, which is a financial loss, or even more concerning, it could be a safety issue. The best way to safeguard authenticity is to buy from distributors authorized by SKF. I would say raising awareness about counterfeits is the most effective solution. The other leg is of course taking legal actions against producers and sellers, which is extremely important in order to remove counterfeit products from the market. But that only works to a certain degree. If the customer is still not keen on trying to buy genuine products, there will always be counterfeits popping up. So, it’s always a challenge. Working on both parallel tracks is the most successful and the most effective way to combat counterfeiting.

How can bearing users differentiate between counterfeit vs genuine SKF bearings?

We recommend customers do not try to see or determine authenticity by themselves. Come to SKF and we will help you free of charge. We feel it is our corporate responsibility to support our customers by helping them to not get cheated with counterfeits. Counterfeit bearings are really good lookalikes, and usually look identical to genuine products, so it is really, difficult for bearing users to see the difference. Don’t assume the product is genuine just because it looks nice. The counterfeiters are very skilled in copying what we are doing. We have a trained team of highly skilled experts who know what different types of things to look for, however, we don’t go into detail about what that is because it would be a very good blue print for the counterfeiters to further replicate our products. In addition to this, we have a huge assortment of products which makes it extremely difficult to describe how certain products should look. To support bearing users in case they suspect that an SKF product might be counterfeit we offer a free verification service using the ‘SKF Authenticate’ app. 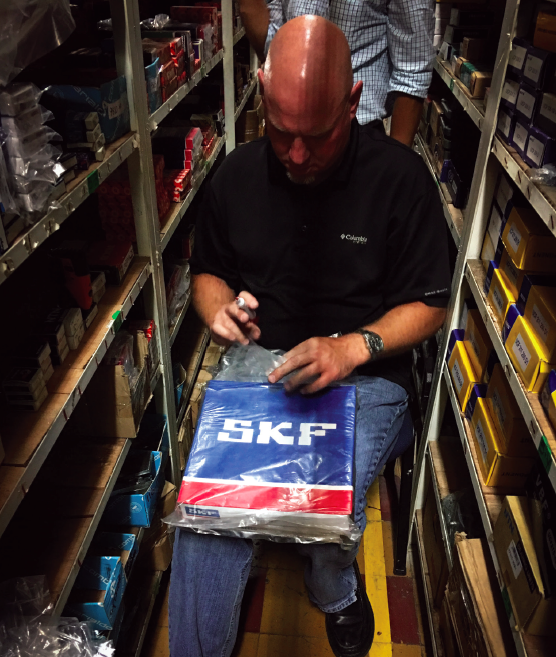 What can consumers do to prevent purchasing counterfeit parts?

The best way to safeguard authenticity is to buy directly from the manufacturer or from a distributor authorized by the manufacturer. SKF have a worldwide network of authorized distributors that is found on www.skf.com. Bearing users should also be observant for unusual good offers, e.g. unusual short delivery time or high availability on rate items. If the offer sounds too good to be true it probably isn’t. Be vigilant when selecting your bearing supplier.

What do you predict will be the outcome of this war on counterfeits?

By raising awareness, I would like to see fewer customers getting cheated by counterfeits and we are taking steps in that direction. I think there will always be people who will try to benefit from those who are not aware. There will always be counterfeiters trying to cheat unknowing customers, so I don’t think we will eliminate counterfeiting completely, but we can definitely reduce the number of counterfeit products in the market, and reduce the number of customers being affected. Through awareness campaigns, we will continue helping customers authenticate their products and support them in finding where to buy genuine products.

Resources
SKF has a very strong commitment to support both customers and law enforcement in order to remove counterfeits from the market. Customers can check the authenticity of their products using the SKF Authenticate app, available both on IOS and Android (download free of charge). SKF further provides an email address; genuine@SKF.com where anyone can raise questions related to counterfeit bearings as well as report suspicious activities.

This article is published in BearingNews September 2021 issue