Even with careful observation, measurement and monitoring, wear in rolling bearings is hard to predict. SKF has dedicated considerable research and analysis to the study of sliding and wear and their effect on bearing life.

In some applications, rolling bearings can suffer a substantial loss of material (wear) due to lack of lubrication, the presence of abrasive particles, corrosion, oscillating rotation and other causes. Such wear can in turn have a detrimental effect on bearing operation, from the reduction of preload to potentially catastrophic effects. One common and perhaps unexpected consequence of uneven wear in the bearing raceways is the increasing possibility of surface fatigue. In some applications, it is not uncommon to see bands of surface distress or surface spalling along the raceways. This is associated with the possibility of raceway profile modification from uneven wear, which can give rise to stress concentration in the lines of high pressure and lower film thickness.

Rolling bearings operating under poor lubrication conditions in situations of uneven sliding or with the presence of abrasive particles or contamination from liquids can suffer substantial modifications in the raceway profiles (fig. 1). In time, these modifications can develop stress concentrations in the most loaded areas (fig. 2), which potentially can lead to an increase of localized surface fatigue, producing bands of micro-spalling or spalling along the raceways in the areas of higher stress (fig. 3). This potential damage mode can affect any rolling bearing, but applications with the presence of heavy contamination, corrosion, poor lubrication and uneven sliding or variable loading will be the most affected. Typically, examples are found in the mining industry, pulp and paper, wind applications and other areas.

Wear in rolling bearings is a non-linear phenomenon, and even observations and measurement of rolling bearing wear in regular intervals show that simple intuition is not sufficient to predict how wear will evolve in time. This is due to a variety of reasons; wear depends mainly on local sliding and local load, and wear itself modifies these two factors, so simple extrapo-lation is not possible. A more rigorous analysis then is necessary, which is why SKF has dedicated efforts to the research of sliding and wear in rolling bearings and their effects on bearing life [1].

Any rolling bearing has some degree of sliding; this is normal. It is produced by the bearing internal geometry and/or the loading conditions. For example, a radial ball or roller bearing, perfectly radially loaded, will also have sliding (Heathcote slip) due to the rolling element/ring contact geometry and elastic deformation from load (figs. 4a and 4b). Since wear depends on sliding, in time (if the conditions are given right) it would be expected that the pure rolling bands (A and A1) will be the only zones where wear will not happen and therefore the only zones that will carry all the load in the contact.

Fortunately, this only might happen in situations of heavy wear, such as the presence of abrasive particles, heavy corrosion or abnormal sliding due to inappropriate loading or mounting of the bearing. In most cases the bearings work properly, and this sliding will be the normal working environment of a rolling bearing without problems.

The current paper will go a bit deeper into the main mechanisms of the potential wear-fatigue combination damage mode. The modelling and the experiments were carried out to understand it better and to shed some light on ways of prevention.

Modelling wear
In [2], different wear models under lubricated conditions are discussed, and it is concluded that in all cases they can be represented by an Archard model [3], sometimes with a sophisticated wear coefficient model. In most cases the wear coefficient is an empirical factor based on experiments. Thus, the most general wear equation is:

The wear volume can be expressed as:

Thus, substituting (2) into (1) and considering that the contact mean pressure

Now, considering the total contact time t per load cycle, which represents the time of passage of both sliding surfaces throughout the contact zone with the sliding speed, then the sliding area is simply the contact area, thus As = A. The removed layer thickness per number of over-rollings (N) can be calculated by following [2] as:

Where:
us = the local sliding speed [m/s]
u1 = the mean speed of the analysed surface [m/s]
l = the contact length along the sliding direction [m].

Notice that nearly all quantities are local (x,y.) Here also the hardness of the steel in the raceways and rolling elements will be assumed as constant. Equation (4) gives the local thickness of the worn layer removed at every over-rolling in a bearing contact.

To model the interaction wear/fatigue in bearings, a rolling contact fatigue (RCF) model needs to be applied at every over-rolling of the raceway with a previously modified profile (on both surfaces) due to wear; in this way both phenomena (wear and fatigue) interact. Every time that wear modifies the profile a new pressure distribution in the contact needs to be calculated for the fatigue model. This process reflects what happens in real life. However, it is very costly computa­tionally speaking, considering that typical RCF lives can cover millions of over-rollings. Thus, there are simplifications that reduce substantially the computational cost:

To validate the fatigue model, an endurance test was conducted using a cylindrical thrust roller bearing 81107 TN (fig. 6a), axially loaded with C/P = 6.5 and lubrication conditions given by a  k ≈ 0.5.

Prior to testing, an artificial profiling (fig. 6b) was made in the new bearings, as if they had been running under heavy wear conditions. During testing, some bearings failed, mainly due to roller damage (fig. 6c), so that the life model could be compared with the results from the short test. Exactly the same worn rollers and new washers were considered in the model of fig. 5; the results showed very good agreement with the lower bound limit of the measured L10 life, considering the Weibull statistics.

In parallel, wear tests and mea­surements in full bearings were also carried out to calculate the wear coefficient and then validate the model using different sets of experiments. The agreement between model and experiments was also satisfactory.

In thrust cylindrical roller bearings the sliding varies linearly (decreases) from the two edges of the roller towards the pitch line, where sliding is zero (fig. 7). Towards the outside diameter of the bearing the roller will be the fastest surface, and towards the inside diameter it will be the slowest one. To illustrate the concurrent effects of wear and fatigue in a rolling bearing with variable sliding across the raceway, another thrust roller bearing case is considered with a larger bearing (81212 TN), as described in the data of Table 1.

) of with the load conditions as indicated in Table 1 and the simulation intended to reach nominally 300 million over-rollings.

Instead of updating the proﬁles for wear at every over-rolling, to save computational time without losing accuracy, it was found that the updates could be done every 15.5 million over-rollings on the roller. For the simulation, the same model represented as in fig. 5 is applied, including the Archard wear model of equation (4).

The results of the simulation are shown in fig. 8. The ﬁgure displays:

It must be pointed out that the damage map reached a total damage value higher than 1 (crack initiation threshold) after only 31 million over-rollings. The results displayed in fig. 8 are related to the initial and ﬁnal simulation steps. The initial pressure (fig. 8a) in the ﬁrst over-rolling looks more or less Hertzian, but shows some edge-stress effect since a simple straight roller profile was used, instead of a proper profiled roller that avoids those edge stresses. From the results it is evident that the sliding is zero in the pitch line; also, the Archard wear model part of the simulation indicates zero wear in that location.

Indeed, wear is linked to the slip distribution across the raceway. Thus, wear will take place at an increased rate as one moves away from the pitch line of the raceway. Note that originally the contact pressure was nearly rectangular (fig. 8a), but as material is being removed from the two sides of the rolling contact the pressure is reduced in the areas of high sliding and is strongly augmented and concentrated in the area of zero sliding (pitch line), (fig. 8b). This increased pressure produces high stresses and fatigue at a faster rate until failure develops at the middle of the roller (fig. 8c). The simultaneous and concurrent effect of wear and fatigue can indeed accelerate the RCF spalling of the contact. This accelerated fatigue spalling is not related to frictional stress induced by sliding, but rather is the result of the modiﬁcation of the original proﬁle of the rolling bodies (figs. 8d and 8e) leading to a sharp rise in contact stress and localized lower film thickness.

From the modelling of the concurrent effects of abrasive wear and RCF, it is found that sliding might become an import-ant element in increasing the fatigue damage of a bearing. This requires the presence of abrasive particles and/or very poor lubrication conditions in the bearing. Non-uniform slip distribution within the Hertzian contact also contributes to the development of stress risers that signiﬁcantly shorten the fatigue life expectancy of the bearing. Indeed, this seems to be the most signiﬁcant mechanism by which Hertzian sliding might eventually reduce the RCF life of the bearing.

To reduce this risk the following recommendations are given:

The author wants to thank Ralph Meeuwenoord for his kind support in the experimental phase of this project. 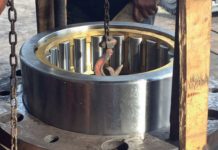 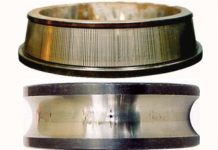 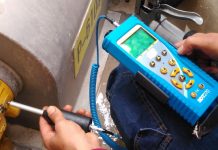